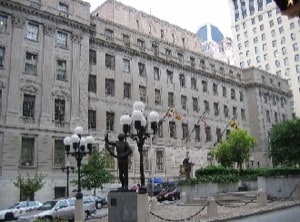 Roland Park Place is a nonprofit organization that provides skilled nursing are, assisted living arrangements, and care for adults with physical or cognitive disabilities. It also serves as a retirement community for persons living independently. Its maximum capacity is 71 certified beds.

The operators of this facility name five factors that constitute "The RPP Difference": prime location, its not-for-profit status; a "customized experience" for residents; "all-in-one costs" (which we take to mean one single monthly fee that covers almost everything), and the fact that Roland Park Place is "small and intimate."

This facility is small in comparison with the average Maryland or U.S. facility, having a total of only 71 beds. The average resident population in nursing homes across the U.S. is 86.2 residents; the Maryland statewide average is 107.5. The odd point here is that, at last official count, Roland Park Place had only 51 residents: it was just over two-thirds filled. How does this place have any trouble booking to capacity?

Unless there is some reason (unbeknownst to us) for the low resident count, then this point, too, works in residents' favor: it makes this facility more "small and intimate," and also could translate into more nursing staff time with each resident. According to the Medicare numbers, it does just that.

There is one other anecdotal measurement of the quality of RPP that is not really a measure of quality at all. But it just very cool. The retirement community at Roland Park - not necessarily just the nursing home - had, at last count, five people 100-years-old or over.

Medicare's category of quality measures is a statistical scoring of the types and amounts of care residents receive. If a facility has great nurse staffing, it would seem to follow that it would have great quality measures (which are the products of what nurses do for residents). In fact, that correlation doesn't happen everywhere - but apparently it does at Roland Park Place, which got a 5-star rating for quality measures.

Medicare breaks down quality measures for short-stay and long-stay residents. Among Roland Park Place's good metrics for short stay residents are its very low rate of pressure ulcers (bed sores) - only 0.7 percent of these residents acquire them - and its zero percent usage of antipsychotic meds. This facility's short-stay residents also are more likely than average to improve their functionality.

Although on par with the averages on vaccinating for flu (reaching 80 percent of short-stay residents), Roland Park Place for some reason pays less attention to the threat of pneumonia, giving preventive shots to only three in 10 of these residents (the state and national averages are about eight in 10).

Roland Park Place also has a somewhat less successful discharge rate for short-stay residents than the state and national averages (52 percent here, versus 59.3 percent for Maryland, 56.9 percent nationally). However, those former residents of this facility, once discharged, are less likely than average to be rehospitalized, and they are five to six times less likely than average to need an ER visit.

For long-stay residents, Roland Park Place was close to equal with the Maryland and U.S. averages for six of the 15 measured Medicare categories. It was better than those averages in seven other categories - with fewer urinary tract infections, fewer pressure ulcers, and fewer depressive symptoms among its long-stay residents. These residents were only about half as likely as average to report having serious pain or to need anti-anxiety meds. None of these residents were subjected to physical restraints. The quirkiest stat was for the dispensation of antipsychotic meds: Roland Park Place was a notable jump higher than the state and national averages in dispensing these drugs. Quirky is the wrong word, really. This is not a good sign. You would expect a facility like this to be providing a quality of care that allowed them to treat

The relatively few imperfections at this facility are almost complimentary by virtue of being relatively minor.

Roland Park Place got a single 4-star Medicare rating (above average) for its health inspection. That inspection found a total of 3 deficiencies - less than half the U.S. average (7.1 deficiencies) and less than a third of the Maryland average (11.4 deficiencies). If that performance is worth only four stars, what's it take to get 5?

This facility has had one complaint inspection in the past several years, this one occurring in July 2016. Medicare complaint inspections can address any number of separate complaints; this inspection addressed one. A resident was found to have a serious bruise on one arm. Investigators concluded that a staffer had caused this injury inadvertently by trying (contrary to the rules) to move the resident without the aid of a second staffer or lifting equipment. The facility responded by giving additional training to all staffers about the proper handling of such situations.

Here in part is what Roland Park Place says about itself: "Roland Park Place (RPP) is the only full-service, accredited nonprofit continuing care retirement community in Charm City and a leader in aging services for older adults and their families." (For those of you from out of town, "Charm City" refers to Baltimore.) Whenever a facility claims to be the only one that does some good thing, our radar starts blipping. Frankly, we don't know whether Roland Park Place is the only such facility - although we do know that at least one nearby facility got equally high Medicare ratings. But we will concede that whatever else Roland Park Place may be, it is much above average. Does this mean this that you will never see viable nursing home lawsuits against Roland Park Place? No. Even good nursing homes make serious mistakes that cause injury and death. But mistakes that lead to litigation are a lot less likely in a place like RPP.

Has someone in your family suffered needlessly at the hands of a nursing home or assisted living facility that has made an error? Call our nursing home attorneys today at (800) 553-8082. Not ready to make a call? You can get a FREE no obligation online case analysis.