Nursing home residents usually have health issues that make it difficult for them to care for themselves. In their weakened state, any physical or medical injury could have devastating consequences, many of which are fatal.

When a family put their trust in a nursing home to take care of their loved one, it is because of a promise the facility makes to take care of that person. When that loved one dies because of carelessness or negligence, that promise is broken. Maryland law allows the family to file a wrongful death claim to seek compensation for their loss because of that broken promise.

This article will address

When a nursing home resident dies at a long-term care facility because of mistakes made by the staff at that facility, Maryland allows the family to recover for the pain they feel as a result of the loss of a loved one. This is called a wrongful death claim.

To succeed on a wrongful death claim, the family has to prove that the facility or its staff was somehow negligent or careless in the treatment of their lost loved one. If there is evidence of negligence, the next step for the family is to prove that the negligence was the cause of the injuries that resulted in the death of their loved one. If that can be established, the family is entitled to be compensated for their emotional loss as well as for any death-related expenses such as a funeral bill.

Daphne is 76 years old and has diabetes. She has severe difficulty walking on her own, so her family decided to admit her to a nursing home in Baltimore. The staff seemed pleasant enough and assured the family that they would take Daphne’s balance issues seriously and ensure that she is assisted in walking. The staff also promised to address Daphne’s weight issues as best they can. 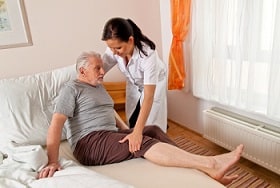 For the first few weeks, everything goes perfect for Daphne. But one day, she decides she is tired of lying in bed and decides to take a stroll. Daphne’s nurse is playing on her cell phone and fails to notice Daphne exiting her room and walking down the hallway.

Daphne does not make it very far. She slips on a wet spot, smashes her forehead against the floor and is left unconscious. She is rushed to a nearby hospital where she is diagnosed with a severe brain bleed. Despite the efforts of the doctors at the hospital, Daphne tragically dies.

Daphne’s family should be able to file a wrongful death/survival action claim. The nursing home staff’s failure to monitor Daphne, in spite of their knowledge that she could not walk on her own, is negligent. Also, the staff failed to notice and clean up the wet spot on the floor that caused Daphne to slip. If the family can prove that the fall caused her death, they likely can succeed on a wrongful death claim against the nursing home.

We often give a trite speech about how you need to use caution when posting sample verdicts and settlements. This speech holds particular force in Maryland nursing home cases. Why? Because most of these cases reach a settlement. One Harvard study shows that only 8% of the filed nursing home cases ever make it to trial. The statistics are probably much lower in Maryland because of the hoops lawyers have to jump through before filing suit.

Those claims that settle are rarely reported. The nursing home lawsuits our law firm settles are invariably subject to confidentiality clauses. This means we cannot offer the type of details about our cases and the defendants that would give more illustrative flavor to why the case was valued as it was.

So the take-home message is that while these examples are instructive in giving lawyers and the families of victims some insight into the range of value of these cases, that should be taken with several pinches of salt.

Our nursing homes are a mess in Maryland. Meritorious nursing home lawsuits do more than just give more to the victims. These claim help police a nursing home industry rife with corruption, negligence, neglect, and abuse. 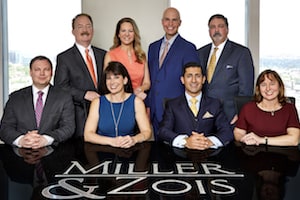 Our law firm handles nursing home wrongful death cases in the Baltimore-Washington area. If you have lost a loved one as a result of negligence in a nursing home, get a free consultation and find out what your options are. Call us at (800) 553-8082 or get a free case evaluation online.

More Maryland Nursing Home Lawsuit Information
Contact Us
Practice Areas
Client Reviews
★★★★★
“When my sister was killed, we turned to Miller & Zois to fight for us. They stood by us every step of the way and we ended up getting more money than we asked for.” C.B. (Baltimore City)
View More
Our Firm ›
Attorneys ›
Medical Malpractice ›
Personal Injury Practice ›
Communities Served ›
Injury Victim Help Center ›
Plaintiff Attorney Center ›
Insurance Company Insight ›