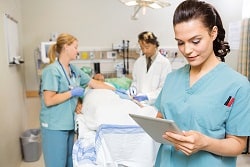 This nursing home wrongful death claim was filed in Montgomery County after a 100-year-old woman was found beaten and injured on the floor of her room. It was filed in Health Claims Arbitration on February 13, 2018, and it is the 75th medical malpractice case filed in Maryland this year.

A resident of the Brightview Fallsgrove nursing home was found by herself at the foot of her bed, beaten and severely injured. She sustained a scalp hematoma, soft tissue swelling over her right eye socket, buckling nasal bones, and multiple cuts and bruises to her face and wrist.

The exact series of events is unclear because it appears as though two Brightview staff members dragged the woman into her position at the foot of the bed and attempted a hurried cleanup of the scene. (Was this woman beaten? Was she assaulted by other residents? Was she assaulted by her caregivers? Is this even what happened or plaintiffs' lawyer hyperbole. We have no clue. This is a crazy story, right?)

Before her assault, the woman was alert, highly interactive, and mobile with the help of a walker. Her condition declined after the incident until she died of her injuries one week later, at the age of 100.

Throughout her report, the claimant's expert witness, a registered nurse, refers to the incident as a "fall" rather than "assault and battery." The official records and EMS report indicate that the woman was found lying on the floor after she had fallen out of bed and hit her forehead on the floor. But the woman's bruising and skin impairment was not typical of a fall, so state and county agencies are conducting further investigation into possible resident abuse allegations. There were no witnesses of the "fall."

Even if there was no harmful intent and the woman did simply fall, the nursing home is still potentially culpable because they are responsible for fall prevention. According to the expert, a physician's order for wheelchair use was written the day before the "fall," but it was not signed until the day after the fall. Medical records give no explanation for the delay. The nursing home allegedly also had no fall prevention plan of care in place, even though the woman had fallen several times previously and was a known fall risk.

The valuation of this case is going to be tricky. She was sent to hospice and died the next day. The cause of death was hypertensive artheroscierotic cardiovascular disease (HASCVD). So what exactly do we have on damages? A day of pain and suffering for a fall of unknown etiology? The defense to the case is going to revolve around the fact that this woman was 100-years-old. The plaintiff's nursing home lawyer should argue that if you make it to 100, you should die warm in and in your bed and not like that.