The medical term for a bed sore is a decubitus ulcer. You may have also heard them call a pressure sore or a skin sore. Most bedsores start off innocently enough, with a small mark on the skin, often on the lower back or buttocks.

Unrecognized and untreated, these innocuous marks can grow into open wounds. In the worst cases, the flesh becomes necrotic and dies, infecting nearby tissue, organs, and bone. This means that the worst bed sores can be fatal. 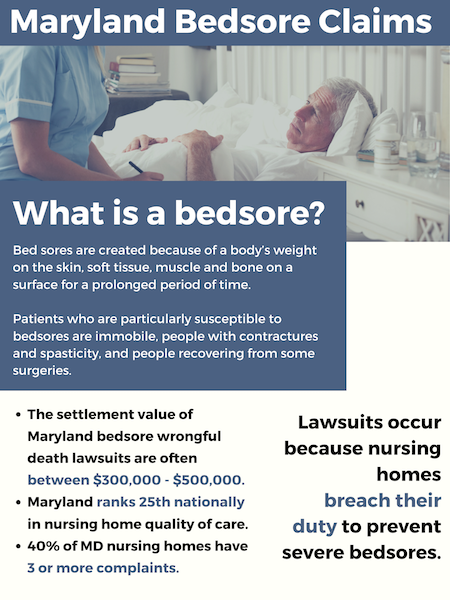 Bed sores result from prolonged periods of inactivity while lying or sitting on a surface. The body’s weight puts pressure on the skin, soft tissue, muscle and bone. Active people do not typically have problems with bed sores because constant, prolonged pressure is required to initiate a sore. In someone less mobile, however, capillaries in the skin become blocked from the pressure, and the lack of blood flow harms the skin.

Bed sores begin to develop after just a few hours. People who are particularly susceptible to bedsores include those who are immobile, who have contractures or spasticity, and who are recovering from certain surgeries. Most bed sore lawsuits are the result of a failure to identify developing bedsores.

There are four stages of decubitus ulcers. Each stage corresponds to the depth of the ulcer. However, not all ulcers follow a clear progression from stage-I to stage-IV.

Ulcers may cause foul odors, wound drainage, and necrotic tissue. If the wound is necrotic or comes into close contact with urine or feces, life-threatening infection is possible.

In the best-case scenario, beds sores are simply avoided. Good nutrition and hydration ensure healthy skin and good blood flow, decreasing the risk of bed sores. Keeping the skin clean and moisturized also reduces the risk of developing sores. All patients susceptible to bed sores should frequently be repositioned.

When they do develop, the treatment of bed sores depends largely on the stage and severity of the wound. For minor sores, the solution is to keep pressure off of the developing ulcer to prevent it from worsening.

Sometimes, getting a patient off of a standard mattress or wheelchair and onto specialized bedding or padding can help the wound to heal and prevent reoccurrence. It is critically important to reposition the body frequently, preventing sustained pressure on vulnerable areas. Placing a pillow between the legs is a simple way to prevent sores around the knees, for example.

We care about victims and their loved ones and fight to get them the compensation they truly deserve.

If a bed sore progresses past the initial stage, caretakers must ensure that the wound is kept dry clean. Antibiotics may be necessary in the case of infection. In more severe cases, a specialized dressing should be applied to the wound. If necessary, the wound may need debridement, the removal of dead, damaged or infected tissue, to avoid sepsis, necrotizing fasciitis, and gangrene. Surgery, too, may be necessary in severe cases.

Treatment can be made more difficult when patients are malnourished or anemic. Doctors must monitor the whole patient, not just the sores themselves, keeping an eye on nutrition and other health measures. It is also vital that all of a patient’s health care providers are informed about the situation.

Around 2.5 million Americans suffer from bed sores each year. Researchers estimate that bed sores are the proximate or originating cause of 60,000 deaths each year. The fatality rate for patients admitted to the hospital for the treatment of bed sores is around 13%. Recent studies have also established that there is a causal link between bed sores and general patient mortality and prognosis.

The elderly are not the only members of the population who get bed sores. 7-8% of all paraplegics die because of pressure sores. Pressure sores are also a common problem in hospital ICU units. Around 41% of ICU patients are estimated to have bed sores.

Hospital and nursing home acquired bed sores increase national healthcare costs significantly. Their burden on the healthcare system may be as high as $26.8 billion a year.

Who is at Risk of Developing Bed Sores?

People with restricted or limited movement are at the greatest risk of developing bed sores. For example, those who use a wheelchair or are confined to bed are at greater risk. For those who use wheelchairs, bed sores can develop on the tailbone, buttocks, shoulders, spine, arms, or legs. For those confined to bed, sores commonly develop on the heels, ankles, buttocks, tailbone, and hips.

There are also test results and symptoms that are warning signs of bed sores. Serum albumin below 3.4 g/dl, weight loss of more than 10% during last month, and Hgb less than 12 mg per dl are all warning signs. Malnutrition, dehydration, and anemia are significant risk factors. Other warning signs include pale skin, a dry or swollen tongue, red or swollen lips, swollen skin, poor skin turgor, bilateral edema, muscle wasting, calf tenderness, and reduced urinary output.

Hospitals frequently use a tool known as the Braden Scale (also called or Braden Skin Assessment) to document the risk that a patient might develop a bed sore. The Braden Scale consists of a number of criteria, each of which has a numerical value. The total score determines the level of risk.

The overwhelming majority of our law firm's bed sore cases are nursing home cases. In nursing homes, around 12.5% of individuals with mobility impairments, malnourishment, or who are in a coma experience bed sores. The number decreases to 2.5% for those who do not suffer from those conditions.

Nobody, however, should ever have a stage-III pressure ulcer or beyond. When patients and nursing home residents do have a severe ulcer, it is likely that they are the victims of negligence on the part of their health care or nursing home care provider.

What is the Duty of Healthcare Providers to Prevent Bedsores?

The reality is that developing bedsores is not always avoidable. Exacerbation of bedsores, however, is preventable. Nursing homes and other assisted care facilities have a duty to prevent severe bedsores. Their staff must be trained and given enough time to thoroughly check their patients and residents for signs of bedsores.

At the first sign of danger, if appropriate measures are taken, more severe medical complications can be avoided. Failure to properly treat these ulcers, which may require a physician or surgical intervention, can cause serious injuries and death.

Federal regulations set the minimum standard of care for hospitals and nursing homes when it comes to bedsores. Health care providers must "ensure that (1) a resident who enters the facility without pressure sores does not develop pressure sores unless the individual's clinical condition demonstrates that they were unavoidable; and, (2) a resident having pressure sores receives necessary treatment and services to promote healing, prevent infection and prevent new sores from developing." 42 C.F.R. § 483.25(c).

Bed sores present a problem in the medical community considering how quickly a wound or infection can spread throughout the body. Clinical guidelines that provide recommendations on how patients should be treated once pressure sores are present must be followed.

The biggest factor is assessment, meaning that care providers need to determine the size, location, and severity of the sore before developing a plan of action for its treatment. The failure to properly assess bedsores is the mother of so many nursing home injury and wrongful death cases.

These are some of the common defenses we see in bed sore cases:

However, these cases are hard to defend because it is rare to find significant bed sores if the nursing home or hospital is doing their job well.

How our Law Firm Proves that Nursing Homes were Negligent

Nursing home records help us tell a complete story. These records include extensive intake documents. In most of the cases we have litigated, our patients entered the nursing home with no skin problems.

Records will frequently document regular skin checks and rotation, yet somehow a stage-IV ulcer is suddenly found with no warning signs. A proper inspection would have revealed such a wound well before it became a life-threatening problem, revealing that the nursing home was lying about carrying out regular checks.

One prime area of discovery in nursing home cases in some states, especially when punitive damages are available, is the nursing home’s financial records and staffing records. Poor staffing means that inadequate attention is paid to patients. Where a nursing home is understaffed, a jury is allowed to infer a financial motive to provide inadequate care.

Below we provide samples of verdicts and settlements from bed sore lawsuits. However, the value of a particular case depends on the particular facts and circumstances of each victim. It is hard to gauge the value of your case based solely on the value of similar cases because there are so many different variables involved.

If someone you love has a bedsore or other injury that you suspect stems from that a nursing home that violated the law or providing improper care, call our Maryland nursing home attorneys at (800) 553-8082 for a free consultation, or get a free internet consultation. There are no fees or expenses unless money damages are obtained for you.

“An overview of co-morbidities and the development of pressure ulcers among older adults” by Efraim Jaul et al., BMC Geriatrics, 2018. Outlines how a number of other conditions put older adults at a higher risk of developing pressure ulcers.

“Risk Assessment and Prevention of Pressure Ulcers: A Clinical Practice Guideline From the American College of Physicians” Amir Qaseem et al., Annals of Internal Medicine, 2015 Includes key recommendations for the detection and treatment of pressure ulcers, from diagnostic scales to types of mattresses. Dissects what medical researchers know and don’t know about the prevention and healing of pressure ulcers.

More Information
Practice Areas
Client Reviews
★★★★★
“When my sister was killed, we turned to Miller & Zois to fight for us. They stood by us every step of the way and we ended up getting more money than we asked for.” C.B. (Baltimore City)
View More
Our Firm ›
Attorneys ›
Medical Malpractice ›
Personal Injury Practice ›
Communities Served ›
Injury Victim Help Center ›
Plaintiff Attorney Center ›
Insurance Company Insight ›