Our law firm handles serious injury and wrongful death lawsuits against Genesis Healthcare in the state of Maryland. This page discusses the company and looks at medical negligence cases against it.

Genesis HealthCare operates hundreds of rehabilitation, nursing, and long-term care services in almost every state in the continental U.S. This company grew into a powerhouse out of nowhere. Back in 1985, it had nine nursing homes. As the mega nursing home model developed, so did Genesis.

Today, it has 50,000 employees. It is worth over $30 billion and is the nation's largest provider. In Maryland, it has what appears to be almost 40 different nursing homes. Eight of these are in Baltimore. The others are scattered throughout the state.

Maryland is a big state for Genesis Healthcare. Our small state is second in contributions received by their political action committee.

Who is the actual owner of your local Genesis nursing home? These entities are structured through an intricate maze of holding companies and limited liability corporations owned by various investors.

This is no hospital-like non-profit. The goal for this business is to make as much money as it possibly can for its owners and shareholders. Does this goal sometimes conflict with patient care? Of course it does.

Below is a partial list of lawsuits filed against Genesis in Maryland in recent years:

Below is a list of partial list of lawsuits filed against Genesis in Maryland and the allegations, if available. You can click on the links for a complete analysis of the claim for some of these cases.

Most of these lawsuits against Genesis are filed with little or no pre-trial settlement talks. Why? Genesis typically wants to find out more about the case. The only meaningful way to do this is to let the plaintiff file suit and conduct discovery. This gives the nursing home a chance to assess the settlement value of the claim.

Unlike Manor Care, Genesis Healthcare does not inundate us with their brand name, downplaying the Genesis umbrella (at least in Maryland). If you do a SDAT search of individual Genesis nursing homes, they have their incorporated entities for each particular center.

From a marketing perspective, I think it helps them deflect media attention when a reporter decides to run the "nursing homes are awful" stories that come out occasionally that leave everyone aghast for 20 minutes before continuing with their days unaffected (which is why the nursing home crisis in the country continues unabated). So when someone sues a Genesis nursing home in, let's say, Severna Park, they might just sue the Severna Park Center as opposed to Genesis.

Why is this important? If you are suing Genesis Healthcare, you want to get your suit filed long in advance of the statute of limitations. Why? In what appears to be a by-product of this psychology, Genesis has a complicated web of companies with subsidiaries that are unbelievably Enron-like confusing.

Want an example? This was, at one point, the structure of Genesis' Catonsville, Maryland operation:

No one is suggesting that Genesis sets up these schemes to avoid liability or service of process in nursing home cases. But you want to get your case filed in advance of the statute of limitations so you can make sure all is square. Typically, Genesis will just make sure to provide the appropriate name of the defendants in the answer which should solve the concern. But you don't want to be relying on them taking that step when the statute of limitations has already expired.

Who do you serve when you file a lawsuit? It depends on which entity you are suing. If you are suing Genesis Healthcare Corporation, you will serve:

Lawyers for Genesis in Maryland 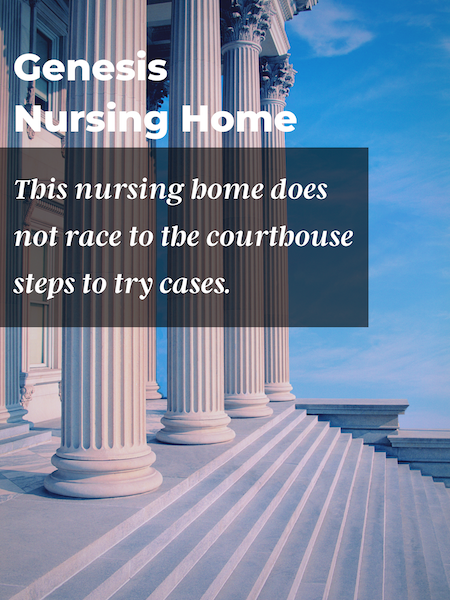 To defend lawsuits, Genesis has, in the past, hired Eccleston & Wolf, a law firm with offices in the District of Columbia, Maryland, and Virginia to represent the nursing homes. But how many of these cases go to trial?

We cannot find a single report of a settlement or a verdict against Genesis Healthcare in Maryland. Do they never get sued? Of course not. Genesis is settling virtually all of the nursing home cases filed against it and putting strict confidentiality language in the settlements.

In the past, Genesis has had a high self-retention which means it is playing most of its settlements and verdicts out of its own pocket. This makes sense when you think about it. If you are Genesis, you want to be able to settle cases on your terms as opposed to having to battle with the insurance company to get the claim resolved.

As an aside, this is very good for the settlement value of nursing home cases. As a plaintiffs' lawyer, you always like defendants that are afraid to try a case because they often pay more for a claim than it is worth. The problem, however, is that their strategy works from a public relations standpoint. This lack of publicity of the mistakes that are causing suffering and death means further delay in how long it will take for America to finally wake up and demand more from our nursing homes.

But in nursing home cases, these type of samplings are even less illustrative of your average cases. Why? Like other nursing homes, Genesis is image conscious and does not like implicit (settlements) or explicit (verdicts) acknowledgment of their mistakes that get their residents hurt or killed. So they require, as we talk about above, attorneys and the victims to execute confidentiality clauses when the cases settle.

Very few meritorious nursing home cases go to trial. Genesis certainly bends over backward to avoid courtroom in Maryland. Lawsuits against Genesis almost invariably reach an out-of-court settlement if they are not dismissed by the court.

We were not able to find many Genesis verdicts and settlements. Is this in part because Genesis can hide its brand name from many verdicts. So it does not come up in these searches? We do not know.

These are the few we were able to find:

This is a list of Genesis nursing homes in Maryland:

If you or someone you love was a resident at a Genesis Healthcare facility and was hurt or killed by the negligence of this company, call our nursing home lawyers at (800) 553-8082 for a free Internet consultation to discuss your litigation or settlement options.