Catonsville Commons is a 140-bed nursing home in Catonsville, Maryland just off the Baltimore Beltway. It is owned Genesis HealthCare. Genesis is easily the largest nursing home in the country with nearly twice the number of nursing homes as second place Manor Care.

Many Genesis nursing homes in Maryland are below average if you use objective data provided by Medicare. Catonsville Commons is no exception. This facility has low scores on the Medicare survey and a deficiency rate that's well above the tree line.

On its most recent standard Medicare inspection, in April, 2015, this Catonsville facility scored 2 of 5 stars overall. That below-average rating was consistent with its two stars for the health inspection - which turned up a whopping 22 deficiencies. That's twice the national average and about three times the Maryland state average. Any nursing home lawyer will tell you that the common thread in most nursing home injury and wrongful death lawsuits is a center that has a lot of deficiencies in its health inspection.

Only in the nutrition and diet category did Catonsville Commons have no deficiencies; it had deficiencies in all of the other seven measured categories, including seven in administration, six in resident assessment, and four in quality of care. It had one deficiency for mistreatment.

Studies have shown that staffing is a key factor in determining the quality of care provided by a nursing home. Catonsville Commons got 3 of 5 stars for staffing. This is what Genesis seems to shoot for with its nursing home staffing: average. It seems like Genesis wants to spend as little as possible on its staffing without raising too many eyebrows. The problem is when you shoot for average, you find yourself below average.

That is where we are with this nursing home. Catonsville Commons scored below the state and national averages for all five measured categories that track the amount of nursing time per resident. Registered nurse (RN) hours is a good barometer because it is also correlated to good care. It also shows how much the nursing home cares. Do they care to spend extra for the best and most expensive caregivers?

Catonsville Commons was notably lower in terms of RN time per resident (40 minutes a day on average, versus 59 in Maryland and 51 nationally), and it did not compensate with more care time elsewhere. For instance, residents got less than an average amount of time with certified nursing assistants and physical therapists, as well.

This facility got a below-average 2-star rating on quality measures. If this metric applied only to short-stay residents, Catonsville Commons probably would have deserved three stars, since it scored very closely on par with state and national averages across the board. But as for long-stay residents, Catonsville Commons did well on some points, while there also were some serious negatives.

For long-stayers, this facility was far above average on preventing urinary tract infections, with an infection rate of only 0.2 percent, versus 4.5 percent for Maryland, 4.8 percent for the U.S. Only 2.4 percent of the long-stayers here reported moderate to severe pain - less than half as many as statewide, less than a third than the national average. This is certainly a good thing although the cynic who reads this facility's troubling inspection report might worry that patients are unnecessarily overmedicated. Catonsville Commons was a bit above average in having fewer residents with symptoms of depression, and significantly better on limited usage of antianxiety meds (only 8.5 percent of residents receiving them, versus 18.3 percent statewide and 23.6 percent nationally); but this facility was below average in terms of antipsychotic medications (that is, it dealt out a lot more of them).

The Genesis website proclaims that it is a "Specialist in Vitality" - and it even highlights this phrase in red. "Genesis focuses on the Vitality of the person," the company says, referring to both short-stay and long-stay residents.

It is noteworthy, then, that for long-stay residents, at least, Catonsville Commons seems to fall short of this claim. It scored below average on maintaining residents' mobility, and significantly below average on helping residents maintain their independence (30.2 percent of its residents needed help with daily activities, versus 18.7 on average statewide, 15.4 percent on average nationally). This facility also was more apt to use physical restraints on residents: 1 percent, versus 0.6 percent statewide, 0.8 percent nationally. Compared with the state and national norms, Catonsville Commons long-stay residents are more likely to be immobilized. They may have vitality, but quite a few of them do not seem to be moving. Could this just be the luck of the draw, that this nursing home just has more patients that are older and less mobile? It could. But Catonsville Commons is not a nursing home that should be given the benefit of the doubt.

Hiring an Elder Neglect and Abuse Lawyer in Baltimore 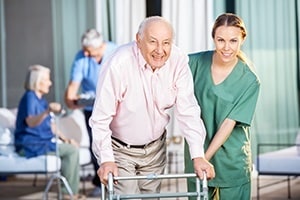 Do you have a possible assisted living or nursing home lawsuit against this Baltimore County facility or any other assisted living or nursing home? We are here to help you get justice and compensation. Call Miller & Zois today at (800) 553-8082. Alternatively, you can get a case review online for free. If you have questions, we have answers for you.