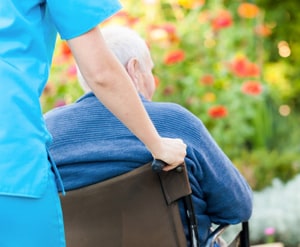 This nursing home wrongful death claim was filed in Montgomery County after a woman broke an arm and a leg during two separate incidences at Sunrise Senior Living. It was filed in Health Claims Arbitration on February 26, 2018, and it is the 97th medical malpractice case filed in Maryland this year.

A woman was residing in the dementia ward at Sunrise Senior Living of Rockville. Another resident who lived down the hall from the woman would habitually walk into the woman's room, mistaking it for his own. Because the man barged into the woman's room so often, the Sunrise staff installed an automatic lock on the woman's door.

With the lock in place, the man was not able to open the door, but he would loudly and forcefully attempt to open the door. One day when the man was continuously trying to open the woman's door, he made such a commotion that the woman went to unlock it. The woman answered the door but did not want to let the man into her room. The man forced his way into her room anyway, knocking her to the ground and breaking her left arm in the process.

In addition to the broken arm, the woman suffered a broken leg as a result of the nursing home's negligence. The woman was already legally blind and required the use of a walker, and her broken arm diminished her ability to walk safely while gripping the support rails on her walker. It did not seem as though the nursing home staff made an attempt to determine how the woman's injuries changed her physical ability, and yet she was given authorization to board a bus and attend a tour of the cherry blossoms in Washington D.C. The woman was not provided with adequate assistance, fell while attempting to exit the bus, and broke her leg.

After the two incidences of injury, the woman's health and quality of life declined until her untimely death.