Located in downtown Baltimore, Fayette Health and Rehabilitation Center is a for-profit facility with 156 certified beds. It offers short-term recovery and rehabilitation services, as well as long-term care. Owned and operated by CommuniCare, an Ohio-based chain with eight Maryland nursing homes. Communicare has had trouble with some of its nursing homes in Maryland. While flawed, Fayette is clearly one of the better ones.

It is common for nursing facilities to have average or good Medicare scores for their short-stay residents and more mixed or negative scores for their long-term residents. That seems logical enough since long-stay residents are apt to have more serious health issues. Fayette Health and Rehab goes against this grain. Based on its latest Medicare metrics, this facility's strongest appeal is its excellent record of service to long-staying residents - which no doubt helped Fayette earn a reasonably good overall 4-star rating from Medicare.

With respect to short-stay residents, Fayette's record leaves much to be desired. Fayette was excellent - in fact, perfect - on prevention of pressure ulcers, or bed sores, with zero percent of short-stay residents having this condition. Short-stayers here also were less likely than average to report having moderate to severe pain. 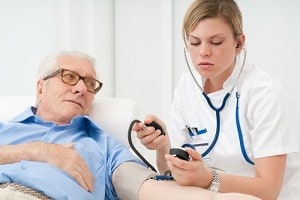 But Fayette had a below-average rate of successful discharges. Former residents were more likely than average to require rehospitalization; and they were almost twice as likely to make a visit to the ER (20.2 percent, versus 10.2 percent for Maryland, 12.1 percent nationally). Short-termers at Fayette were less than half as likely as the Maryland and U.S. averages to experience improvement in functionality, and they were three times as likely as the state and U.S. averages to be on antipsychotic meds.

Fayette appears to have earned a 4-star rating for quality measures thanks to its care of long-term residents. This facility outscored the Maryland and U.S. averages in 12 of 15 categories - and in 7 of these categories, it was much better than the state and national averages.

Fayette long-stayers' rate of falls with injury was a mere 0.7 percent: less than a quarter of the Maryland and U.S. averages. Their rate of urinary tract infections was 1.9 percent, well less than half the state and U.S. averages. Their reports of moderate to severe pain were only one-quarter to one-third the U.S. and Maryland averages. Fayette scored a perfect zero on physical restraints - using none. Even better, Fayette scored a perfect zero on depressive symptoms - its long-stay residents having none. (The Maryland average rate of depression is 4.7 percent, the U.S. average 5.4 percent.)

Fayette was significantly ahead of the Maryland and U.S. averages on maintaining its long-stay residents' continence; on giving them fewer antianxiety meds; on helping these residents maintain their mobility, their independence in daily activities, and healthy weight levels. Fayette's long-stayers also had fewer problems with pressure ulcers than the Maryland and U.S. averages.

Also contributing to Fayette's overall 4-star Medicare rating was its 4-star score for staffing (and within that score, four stars for RN staffing). Fayette came close to matching the Maryland and U.S. averages for time spent by LPNs and LVNs (licensed practical nurses, licensed vocational nurses) and certified nursing assistants. But it was much lower on (quite expensive) physical therapist time: a mere 2 minutes daily per resident, versus 9 minutes for the Maryland average, 6 minutes nationally. In terms of total nursing time per resident per day, Fayette was a bit below the Maryland and U.S. averages. Given that most nursing homes are woefully understaffed, this is not a good mark on Fayette's resume.

Fayette got a 3-star rating in its last standard Medicare health inspection, even though its total of 7 deficiencies bested the Maryland average (11.4 deficiencies) and slightly edged the national average (7.1 deficiencies).

This facility's most serious negative score came in a category that doesn't usually raise big issues: fire safety. Fayette's last fire safety inspection turned up eight deficiencies: twice the Maryland average (4.0) and more than twice the U.S. average (3.4). Notably, Fayette had three deficiencies in its automatic sprinkler systems - which a nursing facility obviously must keep in good working order. Fire safety is a marker for how much the nursing home sweats the small stuff. You really want a nursing home that can do manage the details because that is what good patient care is all about.

Fayette had a fire inspection in September 2015, which identified eight fire safety deficiencies -- including three for the sprinkler systems.

The sprinkler system deficiencies had the potential to harm "many" residents. There is no arguing that point. With a total resident population of 146 at the last official count, Fayette could have put a great many at risk by failing to keep its automatic sprinkler systems functional. We trust that Fayette has addressed this basic but essential maintenance task - and averted a tragedy.

In addition to the fire safety deficiencies, Fayette had a Medicare complaint inspection on January 5, 2016. This inspection was for a single complaint in which it was found that Fayette did not settle a resident's account within the standard 30 days of the resident's death. Not related to patient safety but, again, you worry about the continued markers for lack of attention to details.

Has your loved one has been badly harmed or unexpectedly passed away in a Baltimore nursing home or assisted living facility? You need an experienced nursing home attorney to help you determine whether you may be entitled to money damages for the harms and losses you have been forced to endure. Call our lawyers today at (800) 553-8082 or get a free online case evaluation. We will fight for you.