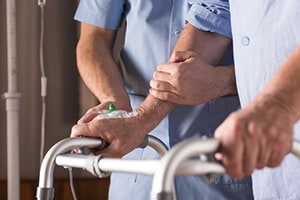 The settlement value of nursing home fall cases depends on many variables. The issues at play in every negligence case, the makeup of the municipality that makes up the jury pool, the likeability of the parties, and the like are always going to be center stage. In the settlements and verdicts below, those factors certainly played a significant role in the outcome of the lawsuit. This is why a verdict or settlement with almost identical facts will have very different outcomes.

Looking at the specific settlement variables in nursing home cases, the cases with the greatest potential values are going to be the most tragic. The most classic high-value nursing home cases are when the resident now needs 24 hour individualized care as a result of the injuries, particularly if the resident is relatively young.

From there, in Maryland, the next highest settlement value case is usually a wrongful death claim. Regardless of how old the victim was, most Maryland juries are going to view depriving a senior of their golden years and the loss of a parent as worth a great deal of money to the surviving family. The downside of these claims from a value perspective is the cap on non-economic damages puts a limit on the value of these cases. It is rare that there are significant economic losses in these cases because most nursing home patients are not earning income or providing household services to their family. So wrongful death nursing home cases in Maryland are largely limited to the cap.

On par with the value of wrongful death cases are claims where the victim survives but suffers permanent injuries that doctors believe will cause pain and discomfort for the rest of the person's life. These cases have a similar value to a death claim because a permanent injury can destroy your ability to enjoy the rest of your life. This is true - and can be even more compelling - when the victim is already suffering from other conditions. Because, for example, if you left leg is already compromised

The "bottom" of the food chain of settlement value involves cases that are nonetheless tragic: serious injury cases that cause great suffering but where the victim ultimately fully recovers. Do our nursing home lawyers take cases like this? Sometimes. The "every case" factors we talked about above - venue, how compelling the victim is, etc. - usually are the driving factors is whether to pursue a claim where the victim endured great suffering but has not recovered.

Below are sample verdicts and settlements in nursing home fall cases. These cases will certainly help you figure out the range of settlement values in these types of cases. Can you use this to figure out how much you will get in a settlement in a similar case? No. There are just too many variables at play. But make no mistake: nursing homes, particularly large chain nursing homes, do not want viable cases to go to trial. The overwhelming majority of meritorious nursing home cases end in an out-of-court settlement.

The values of the Maryland cases are rather low and do not reflect the average value of a nursing home death fall death case in Maryland. But you have to remember that we do not post our nursing home settlements and verdicts because of the confidentiality clauses we are required to sign when we resolve these cases. So the guess here is that these cases were allowed to be reported because the settlements were so ridiculously low.

These are some of the nursing home fall lawsuits that have been filed in Maryland in 2016. The fact patterns often have many reoccurring themes.

Getting a Nursing Home Fall Attorney in Maryland

Have you or a loved one suffered as the result of a mistake or omission by a nursing home? Miller & Zois can help you. You are entitled to justice and compensation for the unnecessary harm that has been done to you. Our law firm, Miller & Zois, has a long history of getting results in serious injury and death cases in Maryland, earning large verdicts and settlements. Call Miller & Zois today to speak to a medical negligence attorney who can help you, at (800) 553-8082, or get a free online case review.