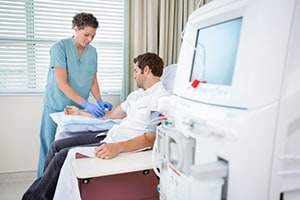 This is an instance where a fairly routine injury (in this case, a non-displaced fracture) becomes a serious medical issue. Although the plaintiff's condition isn't life-threatening, he developed an easily avoidable injury allegedly due to the carelessness of his radiologist.

In February of 2015, the plaintiff is seen at Gaithersburg Medical Center. He complains of painful stiffness and swelling to his right hand and wrist due to a fall. At the hospital, the plaintiff's wrist is x-rayed. The results of the x-ray are reviewed by a radiologist, Dr. Javery. Dr. Javery finds nothing unusual in the x-ray films and the plaintiff's treating physician concludes he suffered a minor sprain. The plaintiff is sent home with instructions to ice the wrist and take over the counter pain medication. The plaintiff's wrist pain continues. and he is eventually diagnosed with by another radiologist. In July, he goes to an orthopedic doctor who immediately diagnoses the a non-displaced scaphoid fracture.

Because of the delayed diagnosis, the fracture doesn't heal properly. When a scaphoid fracture is not properly and timely immobilized, the chance of a permanent injury increased dramatically. The plaintiff first undergoes two unsuccessful surgeries to repair the non-union using a bone graft and screw insertion. He now believes he will require invasive surgery to remove bones in his wrist, which will leave him with permanently reduced wrist mobility and strength. If the plaintiff doesn't undergo this procedure, he believes it will lead to severe arthritis.

Plaintiff's certifying expert is Dr. Sunjary Berdia. Dr. Berdia is the plaintiff's treating orthopedic surgeon. He specializes in hand surgery and his practice is based in Rockville. In his expert report, Dr. Berdia concludes that the failure of the defendants to initially identify the scaphoid fracture was directly responsible for the non-union. He argues that, if the fracture had been detected and the wrist immobilized, the fracture would have most likely healed properly. Dr. Berdia opined that the plaintiff will lose half of the normal range of motion in his right wrist and that his wrist strength will decrease by between 20-40%.

Has an injury gone undetected due to the negligence of a radiologist or orthopedic doctor? You are entitled to justice and compensation for the harm done to you. Miller & Zois is here to help you. We have a long history of obtaining large settlements and verdicts in medical malpractice cases in Maryland. Get a free online case review or call us today at (800) 553-8082.