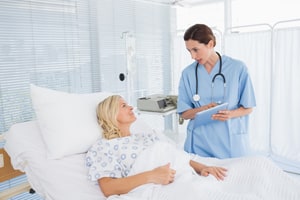 This nursing home wrongful death claim was filed in Montgomery County after a woman broke her leg during a bed transfer, then developed a fatal bed sore while recovering from her injury. It was filed in Health Claims Arbitration on March 15, 2018, and it is the 129th medical malpractice case filed in Maryland this year.

An 84-year-old woman with impaired mobility needed assistance from a geriatric nursing assistant (GNA) when getting out of bed. While attempting to help the woman stand up, the GNA noticed that her right leg was caught in a sheet. The woman heard a popping sound and complained of pain. Long after the incident, x-rays confirmed that the woman suffered a femoral fracture.

The woman was transferred to Holy Cross Hospital, where she underwent surgery to repair her broken leg. During her recovery from her injury and surgery, the woman developed a sacral pressure sore. The pressure ulcer became infected, leading to sepsis and her eventual death.